5 Ways to make a little extra money from your homestead:

January 09, 2021
If you're living on a small farm or piece of land, or even if you're stuck in a city there are many ways to make a little extra money if you're willing to put some thought into it, some planning and a lot of hard work. Here are a few ideas that I've done on my small farm or have seen other people doing. Maybe you'll get a little inspiration from these tips. Garden. If you have some land, and it doesn't even have to be much, there are many ways to make a little extra money with your garden. The obvious one of course is to grow extra produce and sell it to friends, neighbors, co-workers or set up a booth at a farmers market. My suggestion is to choose produce that you enjoy eating as a family. Don't grow eggplant if you don't like eating it, in other words. If you're new at gardening, don't try growing something super difficult. Look up your growing/planting chart and plant by the moon cycle and weather patterns to have more success. Do your resear
Post a Comment
Read more

January 05, 2021
This is the story of the Trash Dump People. People who live in the trash dump, building their houses out of pieces of trash, digging through the trash to find enough barely edible bits of who knows what to eat. Sorting the trash and collecting the recycle items, or things that could be used or fixed or sold. This is how they survived.  This story happened when I was working in southern Brazil as a missionary with Youth With a Mission, (YWAM). Our mission base was in a large, well populated city. Our base director found out that there was a group of people living in the trash dump and we started an outreach to them. He asked for volunteers to go work with these people and I felt God leading me to be one of the volunteers. Somehow we got large donations of food that was still in great condition but the local supermarkets couldn't sell anymore. I was in charge of once a week cooking a huge pot of food for the trash dump people. And when I say huge I don't mean your biggest pot yo
Post a Comment
Read more

Stories from the Amazon - Jungle girl goes to Argentina

This story happened during a time in my life when I was working as a missionary with Cowboys With a Mission, a branch of Youth with a Mission, YWAM. The mission was based in Wyoming with another base in southern Brazil. I was to lead a team of missionary trainees on their outreach period of two months. I was so very reluctant and terrified to be the team leader actually but everyone felt like I was supposed to be the team leader, which I guess was good for me and caused me to grow and learn as well.  Part of our outreach was in southern Brazil where the mission was based and then we were to go on to Argentina for the rest of the outreach period. I am fluent in Portuguese and was used to translating back and forth but Spanish was a whole other language. I can understand it well enough to get pretty much the whole conversation but not to be able to translate it word for word, like I can in Portuguese. My team got pretty frustrated with me on that aspect since they had been a bit spoiled
Post a Comment
Read more

Stories from the Amazon - The Tale of a Million Feathers

December 15, 2020
This story happens one year around the beginning of dry season. One hot day in the Amazon, we were enjoying a relaxing get together with some friends at our farm. Meat was on the grill and the hammocks were strung. We had been doing some work on the farm and our reward was a little bbq, good Brazilian style. In the middle of the day, the heat on a full belly of food is like a tranquilizer, making sleep necessary in a softly swinging hammock with a muggy breeze blowing hot air in your face.  As we were all laying in hammocks or nibbling still on the meat chunks, a car pulled up to the farm gate and a man approached the gate carrying two boxes of chicks. We gestured for him to come in the gate and he did, carrying his boxes. He began his sales pitch by saying he had a box of laying hen chicks and a box of meat broilers. With very convincing words he soon talked us into the great deal he had for us and we bought the chicks. It took a little convincing on my part too to talk my dad into l
Post a Comment
Read more 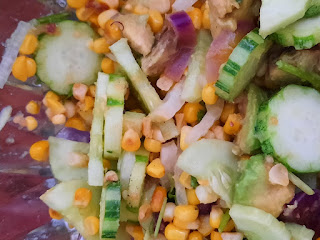 I came up with this yummy salad recipe yesterday while making lunch for the family and trying to avoid our standard go to salads. It was fresh and delicious. Cucumber Corn Salad Ingredients: 3-5 medium sized cucumbers (I used 3) sliced thinly Small sweet onion, chopped chunky About 4 sprigs of cilanto 1 Avocado 3-5 cobs of corn (or 1-2 cups ) 1 Lime Salt and Pepper to taste Garlic powder if desired How to put it together: Slice the cucumbers thin and add to salad bowl. Chop the onion thin or chunky ( I did chunky). Remove the skin and seed from the avocado and slice up into the salad bowl. Add chopped cilanto and the juice of the lime. If you're using cobs of corn, cut the corn off the cob, or if you're using a can of corn, drain the water. Using around 2-3 tablespoons of Olive Oil (or other oil) Place the corn in a skillet with the oil and saute it until it looks golden brown and cooked. Stir while sauteing. Add the corn to the cucumber/cilantro/avocado. Mi
1 comment
Read more 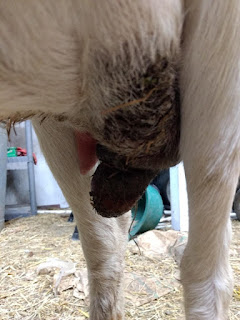 This is a nasty subject but since this is a homesteading tips blog, and I can't find too much on the internet about gangrene mastitis in goats I figured it would be a great idea to share my experiences in hopes that it will help someone with their goat care and husbandry and possibly save a goat's life. My case started out two years before now. One of my favorite does, a heavy milker with a beautiful udder, was acting off one morning. I took her temperature and it was high. I milked her as usual and everything seemed ok. I didn't notice anything off about the milk. I decided the temperature was high enough to warrant a trip to the vet. The vet examined her and decided that she just had a upper respiratory infection. He gave her antibiotics, banamine and b-12 dose. When we got home I kept an eye on her and she just didn't seem to perk up any. By evening I knew something was terribly wrong. I noticed that her udder seemed cool and blueish. Never having seen anything lik
Post a Comment
Read more

January 19, 2020
If you read the previous story about Crazy Bull Part 1, then you might have a little idea of how this one goes...  We raised rodeo bulls at our farm in northern Brazil. I taught horseback riding lessons and my husband rode bulls, did bull fighting and stock contracted and we even put on a couple of rodeos (but that's another story). Some bulls worked out and bucked good but others were crazy and only wanted to kill the one crazy enough to try to ride them. With one string of bucking bulls we had, you really could only go out in the pasture on horseback if you wanted to come back alive. It was a daunting way to earn a living. One particular bull was a very big and mean to the bone Charlois/Brahman cross (kinda like the other one from story Part 1) They maybe even came from the same farm, who knows... They both didn't buck very well and tried to mush you into the ground if you fell off them wrong, or even if you fell off them right too. We decided that this one should also go t
Post a Comment
Read more
More posts